Some 50 years ago, the first elements of today's Institute for Community Inclusion, were formed as the Developmental Evaluation Clinic (At Boston Children's Hospital). In the years following, the modern ICI blossomed into leading disability focused training and research organization that you see today. Join us for a year of special events, celebrating 50 years of inclusion. To keep updated on our developing schedule, feel free join our mailing list, follow us on social media, and check in on our events calendar. 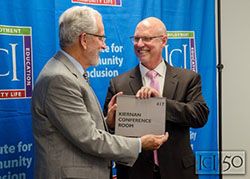 For the grand finale of our 50th anniversary festivities, the ICI welcomed friends and visitors to our offices on June 20, 2018 for our open house celebration.

Read more and see the videos and photos from the night. 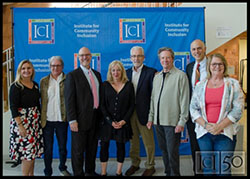 Staff from the ICI and Think College were thrilled to host a screening of Dan Habib’s latest film, Intelligent Lives, in early June. By sharing this film, the ICI hopes to point to a future in which people of all abilities can fully participate in higher education, meaningful employment, and intimate relationships.

Read more about the movie screening. 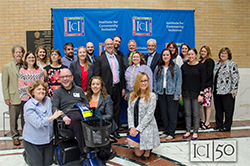 The first event in the ICI’s 50th anniversary celebrations drew an audience of nearly 200 people to the Massachusetts State House. On June 6, the Beacon for Inclusion Awards luncheon celebrated five individuals who are advancing the cause of disability inclusion here in Massachusetts and beyond

Read more about the State House.

We will be posting on social networks with hashtag #ici50

ICIers on the work of inclusion

↓ Scroll down to view timeline ↓